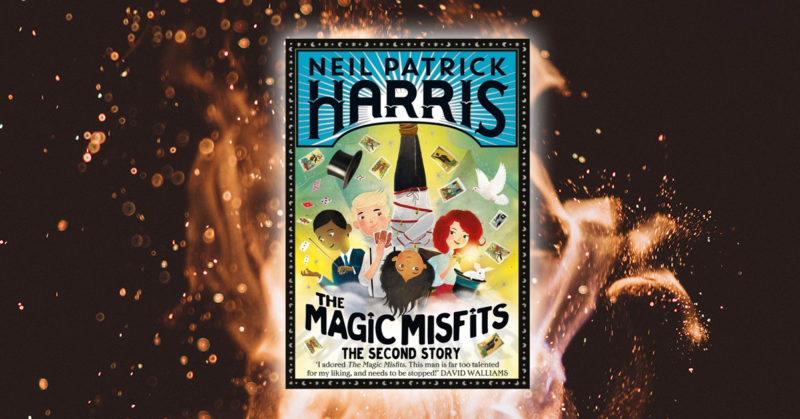 The Magic Misfits are back!

Hold on to your top hats, the Magic Misfits have returned for a brand-new adventure from Emmy award-winning actor Neil Patrick Harris.

Following hot on the heels of their first outing, The Magic Misfits: The Second Story joins the magical best friends for another hilarious story, jam-packed with intrigue and magic tricks. What does book two hold in store for Carter, Leila, Theo, Ridley, Izzy and Olly?

Carter, Leila, Theo, Ridley, Izzy and Olly all felt like outsiders, until they found each other and a shared love of magic and became… The Magic Misfits!

Leila didn’t have the easiest start, growing up in an orphanage and getting bullied for being different. But she has a super-cool secret skill… Leila is an escape artist! And it comes in pretty handy when belonging to a group of magical best friends.

When a famous psychic comes to town Leila and her pals realise they won’t be able to escape the big mystery coming their way. They soon find themselves chasing mad monkeys and banishing ghosts from haunted hotels… the Magic Misfits will do everything they can to save the town, will their magical skills be enough?

Join the Magic Misfits as they discover friendship, adventure and more than a few hidden secrets, in the series that has a magic trick or two up its sleeve.

(VERY EXCITING WARNING: These books contain real magic tricks! As well as codes, ciphers and plenty of secrets hidden throughout.)

‘I adored Magic Misfits. This man is far too talented for my liking, and needs to be stopped!’ David Walliams

Neil Patrick Harris is an accomplished actor, producer, director, host, and author. Perhaps best known to audiences for his role as Barney Stinson on the hit comedy series How I Met Your Mother, he is currently starring as Count Olaf in the Netflix adaptation of Lemony Snicket’s A Series of Unfortunate Events.

The Magic Misfits series are his first books for children.