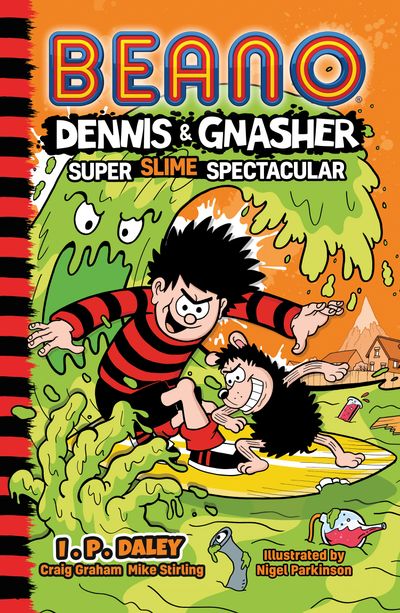 Dennis and Gnasher are back for another adventure.

What could possibly go wrong when Dennis, Gnasher and their classmates undertake a risky experiment to create the ultimate slime?

Join the gang in a race against slime to save Beanotown.

Format: Paperback
Ageband: 7 to 9
Release Date: 07/07/2022
Pages: 208
ISBN: 978-0-7555-0361-2
I.P. Daley is the latest author to chronicle the adventures of the fantastic Dennis and Gnasher.I.P. is ably assisted by Craig Graham and Mike Stirling who were both born in Kirkcaldy, Fife, in the same vintage year when Dennis became the cover star of Beano. Ever since, they've been training to becomes the Brains Behind Beano Books. They've both been Beano Editors, but now Craig is Managing Editor and Mike is Editorial Director (ooh, fancy!) at Beano Studios.