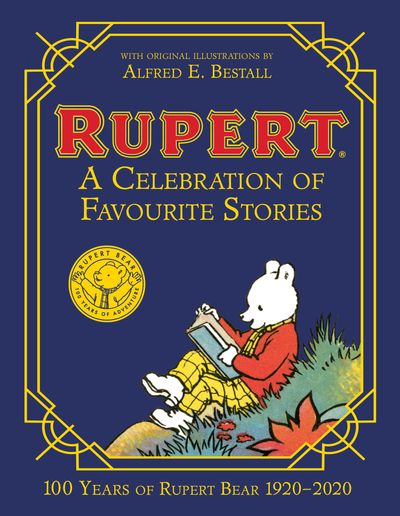 This beautiful collection of stories has been exclusively reissued for the 100th anniversary. Rupert Bear is one of the most beloved and enduring characters in children’s literature. The little bear has had many illustrators over the past hundred years, but Alfred Bestall is widely recognised as the best.

The collection contains eight of Alfred Bestall’s most celebrated Rupert stories, including ‘Rupert and Raggety’ and ‘Rupert and Jack Frost’. It also includes several lavish endpapers, a selection of unpublished sketches, an introduction by Bestall’s goddaughter and an illustrator’s note by Stuart Trotter, the current Rupert Bear illustrator.

Rupert’s world is truly timeless and this beautiful collection will delight readers of all generations.

Format: Hardcover
Ageband: from 8
Release Date: 03/09/2020
Pages: 288
ISBN: 978-1-4052-9800-1
Alfred Bestall was born in Burma in 1892, and for much of his life he lived in Surbiton, Surrey. He served in the First World War and on returning became an illustrator for books and magazines. In 1935 he began writing and illustrating ‘Rupert’ stories for the Daily Express, which he did for 30 years, creating in the process perhaps the best-loved incarnation of the famous bear.