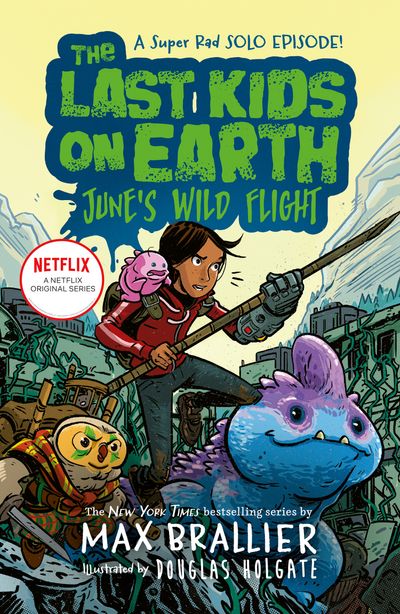 The highly-anticipated new spin-off adventure from the New York Times bestselling series, with over 10 million copies in print

Told from June’s point of view—and set between the shattering events of The Midnight Blade and The Skeleton Road—June’s Wild Flight brings new characters, high-stakes action, and stunning revelations in an adventure that could only be June’s. An essential Last Kids story that readers won’t want to miss!

My name is June Del Toro, but you might know me better as the BRAVEST GIRL ON THE BLOCK.
That’s right, step aside losers and make way for the real hero. It doesn’t take just anyone to stop the whole world from COMPLETE DESTRUCTION at the hands of a mega evil MONSTER VILLAIN.

I thought we had faced the worst with the walking skeletons and zombie hordes (the evil ones, not the cool friendly ones), but now Thrull is raising an army of the UNDEAD, and I’m stuck miles away from Wakefield and my best friends which is way less rad than I thought it would be (don’t tell Jack that).

Now I have to deal with some wicked Wretches, murderous vines and who-knows-what other monsters before I can get back home.

Well… just another day in the adventures of June Del Toro: Saves the World! (Again.)

Author: Max Brallier
Format: Paperback
Ageband: 8 to 12
Release Date: 29/09/2022
Pages: 272
ISBN: 978-0-00-858748-2
Max Brallier is a New York Times, USA Today, and Wall Street Journal bestselling author. His books and series include The Last Kids on Earth, Eerie Elementary, Mister Shivers, Galactic Hot Dogs, and Can YOU Survive the Zombie Apocalypse? He is a writer and producer for Netflix's Emmy-award-winning adaptation of The Last Kids on Earth. Max lives in Los Angeles with his wife and daughter. Visit him at MaxBrallier.com.Douglas Holgate has been a freelance comic book artist and illustrator based in Melbourne, Australia, for more than ten years. He's illustrated books for publishers including HarperCollins, Penguin Random House, Hachette, and Simon & Schuster, and comics for Image, Dynamite, Abrams, and Penguin Random House.