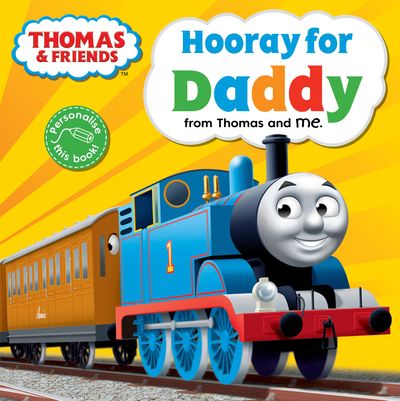 Show your daddy just how much he means to you with help from Thomas and his friends!

Hooray for Daddy is the perfect gift for any daddy who is as strong as Cranky, as cheerful as Toby and always coming to the rescue, like Harold.

Thomas and friends celebrate fathers everywhere in this playful picture book. And children can personalise with their own personal thoughts about their dad – the best in the world!

Author: Rev. W. Awdry
Format: Paperback
Ageband: 3 to 6
Release Date: 02/05/2019
Pages: 32
ISBN: 978-1-4052-9308-2
The Thomas the Tank engines stories were created by the Reverend Wilbert Awdry, whowas born in Hampshire in 1911. He grew up close to the railway and was convinced thatthe steam engines all had different personalities. He used to imagine conversationsbetween them. Later when he was grown up and his son Christopher became ill withmeasles, Wilbert told stories Thomas the Tank Engine and his friends to entertain him. Christopher askedfor more and more stories and Wilbert began writing them down. The first of the Railway Series books waspublished in 1945, and Awdry wrote 26 Railway books in total before his son, Christopher,took over the series. There have since been multiple, hugely popular, Thomas the Tank Engine TV series and films.

Show your daddy just how much he means to you with help from Thomas and his friends!

Hooray for Daddy is the perfect gift for any daddy who is as strong as Cranky, as cheerful as Toby and always coming to the rescue, like Harold.