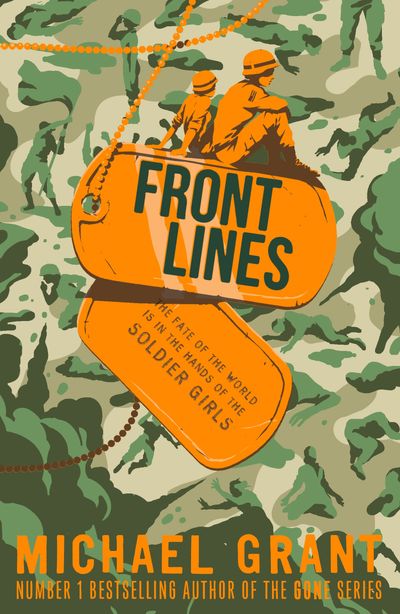 Just when you thought Michael Grant’s GONE series had taken us to the darkest limits of his imagination, the evil genius of young adult fiction is back to take you to the Front Lines of terror. In the tradition of The Book Thief, Code Name Verity and Between Shades of Gray, Front Lines gives the experience of WWII a new immediacy while playing with the ‘what ifs?’ of history.

It’s WWII, but not as you remember it from history lessons! This time the girls aren’t stitching socks for the brave boys at the front. Meet 17-year-old Rio Richlin and her friends Frangie Marr and Rainy Schulterman, three of the newest recruits in the US Armed Forces. They stand shoulder to shoulder with the boys from home as they take on Hitler’s army.

In the face of reluctant colonels and sceptical sergeants, the teenage soldier girls must prove their guts, strength, and resourcefulness as soldiers. Rio has grown up in a world where men don’t cry and girls are supposed to care only about ‘money and looks’. But she has always known that there is something wrong with this system and something else in her. Far from home and in the battlefields, Rio discovers exactly who she is and what she can accomplish

The first in an exciting new young adult trilogy. Front Lines is the saga of a modern teenage heroine in an alternate past that could only have come from the man who gave us GONE, BZRK and Messenger of Fear.

Rio, Frangie and Rainy will delight fans of The Hunger Games’ Katniss Everdeen. But this is a book for anyone who thought they were more! The young adult fiction that Michael Grant is calling his best yet.

Praise for GONE: ‘These are exciting, high-tension stories told in a driving, torrential narrative that never lets up … This is great fiction.’ Stephen King.

Michael Grant has lived an exciting, fast-paced life. He moved in with his wife Katherine after only 24 hours. He has co-authored over 160 books but promises that everything he writes is like nothing you’ve ever read before!

Author: Michael Grant
Format: Paperback
Ageband: 12 to 16
Release Date: 28/01/2016
Pages: 480
ISBN: 978-1-4052-7382-4
A driving, torrential narrative’. Michael has now written around 150 books (with Katherine, as himself, under pseudonyms and as a ghostwriter).He now lives in the San Francisco Bay area taking his inspiration from his charming view of Alcatraz. From across those dark waters have emerged his dystopian fantasy series, GONE, his thrilling futuristic trilogy BZRK, and the menacing Messenger of Fear. As well as reinventing history with his Front Lines series, and revisiting the world of GONE with MONSTER and VILLAIN.