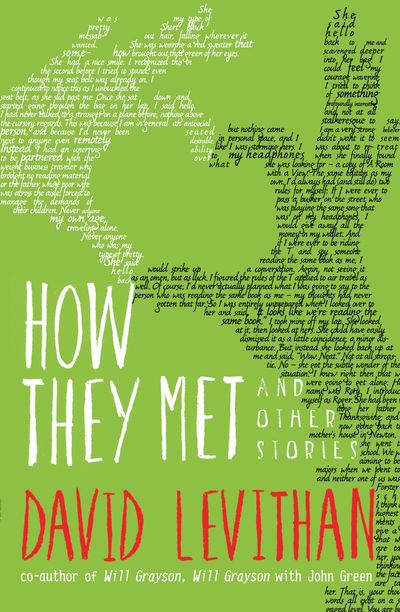 How They Met and Other Stories

A collection of stories about love from the New York Times bestselling author of Every Day and Two Boys Kissing.

They met on a plane / at Starbucks / in class. It was a set-up / it was completely random / they were dancing. It was love at first sight / it took time / it was a disaster!

Love is a complicated, addictive, volatile, scary, wonderful thing. Many of the stories in this collection started out as gifts for the author’s friends. From the happy-ever-after to the unrequited, they explore the many aspects of the emotion that has at some time turned us all inside out and upside down.

David Levithan is no stranger to exploring love in all its complexity and variety as showcased in Boy Meets Boy, Every Day, Another Day, and Two Boys Kissing.

‘Every Day is a wonder: a wholly original premise racing along with a generous heart towards a perfect ending. The best YA makes a place for its readers, and there are few writers as warmly generous as David Levithan.’ Patrick Ness, award-winning author of the Chaos Walking trilogy and A Monster Calls

Author: David Levithan
Format: Paperback
Ageband: from 12
Release Date: 02/01/2014
Pages: 320
ISBN: 978-1-4052-7135-6
David Levithan was not born in France, Milwaukee or Olympia, Washington. He did not go to Eton, Harvard Law School or Oxford University. He is not the author of War and Peace, Hollywood Wives: The New Generation or The Baby-sitters Club #8: Boy-crazy Stacey. He has not won the Newbery Medal, the Pulitzer Prize, the Bausch & Lomb Science Award or the race for eleventh-grade vice president. He currently does not live in Manhatten.