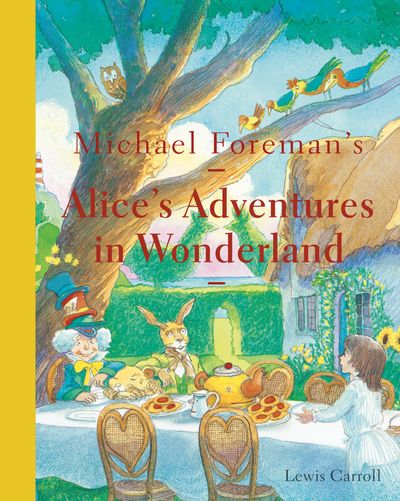 Michael Foreman’s watercolours beautifully capture the world of Wonderland in all of its breathtaking glory.

A beautiful new edition of the timeless classic featuring the Kate Greenaway Award nominated illustrations of Michael Foreman, one of today’s best-loved artists. This is a gift book to be enjoyed by families year after year and a great addition to any child’s home library.

Without a doubt one of the greatest achievements in children’s literature, Alice’s Adventures in Wonderland introduces children to a whole world of humour, fun and invention. Featuring more iconic characters and locations than any other children’s story, Alice’s world introduces today’s children to the Mad Hatter, the White Rabbit, the evil Queen of Hearts, the tea party and, of course, the rabbit hole that starts it all.

The Illustrator
Michael Foreman’s numerous books for children have earned him widespread recognition as one of the world’s leading illustrators. He has worked on a vast range of children’s books, and has collaborated with Terry Jones on all of his books for children. He also writes and illustrates his own books, including War Boy and War Game – winners of the Kate Greenaway Award and Smarties Book Prize respectively – and After the War was Over. Also he has illustrated The Knight and the Squire and The Lady and the Squire, as well as the classic stories Peter Pan and Wendy and The Wind in the Willows. Michael lives in London and St Ives.

Format: Hardback
Ageband: 7 to 9
Release Date: 06/08/2015
Pages: 176
ISBN: 978-1-84365-308-0
Lewis Carroll (1832-1898) was the pen-name of Charles Dodgson.Michael Foreman’s numerous books for children have earned him widespread recognition as one of the world’s leading illustrators. He has regularly collaborated with Terry Jones, Michael Morpurgo and others while several of his own books are also considered modern classics. Titles include War Boy, War Game, Terry Jones's Erik the Viking and Animal Tales, Michael Morpurgo's Farm Boy and many more.