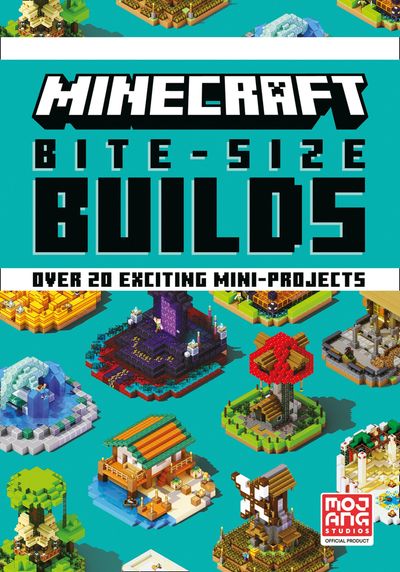 Learn how to design, build and customise 20 mini-projects in Minecraft, from firefighter planes and deep-sea submarines to hidden bunkers and mini arcade games.

There’s even a superhero flying school! With detailed instructions, block hacks and build tips, this book will encourage you to polish old skills and learn new tricks as you create a wide range of fun, bite-sized builds to impress your friends in Minecraft.

Each build is accompanied by exploded views, step-by-step guides and detailed instructions to show you how to complete each build from start to finish. Informative text will help you with your construction understanding, and encourage you to use your new knowledge to create your very own builds.

Format: Hardback
Ageband: from 7
Release Date: 13/05/2021
Pages: 96
ISBN: 978-0-7555-0040-6
Mojang is a games studio based in Stockholm, Sweden. Mojang was founded in 2009 by Markus “Notch… Persson and Jakob Porser. Markus Persson is also the creator of Mojang’s best-selling game to date: Minecraft. The alpha version of Minecraft was launched in 2009, and the official game went on sale in 2011. Since then over 200 million copies have been sold, across multiple platforms. It is now the second best-selling video game of all time. In 2014, Mojang was bought by Microsoft. The acquisition hasn’t changed much about the company – they still release and support games on multiple platforms, including iOS, Playstation and many more, as well as Windows and Xbox. Mojang have retained their independent spirit and continue to treat their community with the respect and honesty it deserves. Mojang celebrated 10 years of Minecraft in 2019.