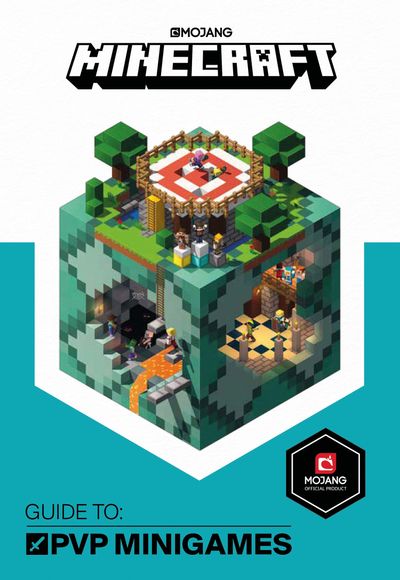 When it comes to making minigames for Minecraft, the only limit is your imagination.

The official Minecraft Guide to PVP Minigames is full of inspiring games for you to recreate in your own world. Whether you prefer non-PVP combat games like arrow golf and elytra ace or games that let you battle other players like spleef and sky wars, there’s something for everyone.

With insider info and tips from the experts at Mojang, this is the definitive guide to PVP Minigames for Minecraft.

Perfect for Minecraft fans of all ages.

Collect all the new Minecraft Guidebooks:

Minecraft Guide to the Nether and the End

Minecraft Guide to Enchantments and Potions

Minecraft The Survivors’ Book of Secrets

Format: Hardback
Ageband: from 8
Release Date: 05/07/2018
Pages: 80
ISBN: 978-1-4052-8896-5
Mojang is a games studio based in Stockholm, Sweden. Mojang was founded in 2009 by Markus “Notch… Persson and Jakob Porser. Markus Persson is also the creator of Mojang’s best-selling game to date: Minecraft. The alpha version of Minecraft was launched in 2009, and the official game went on sale in 2011. Since then over 100 million copies have been sold, across multiple platforms. It is now the second best-selling video game of all time. In 2014, Mojang was bought by Microsoft. The acquisition hasn’t changed much about the company – they still release and support games on multiple platforms, including iOS, Playstation and many more, as well as Windows and Xbox. Mojang plan to keep their independent spirit and continue to treat their community with the respect and honesty it deserves.

These stylish, full-colour books are the perfect addition to any Minecraft fan's shelf - or a great help for someone just starting out in the game.', Games Master, 2017 -