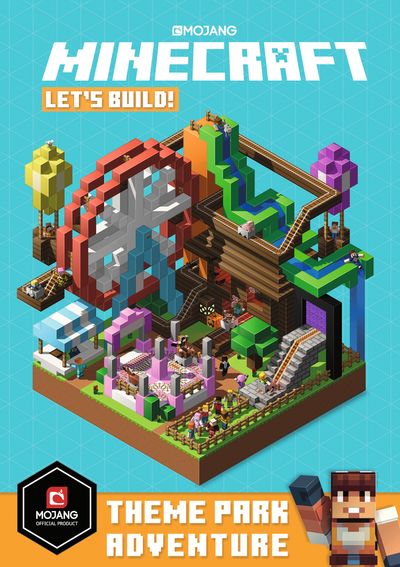 Theme Park Adventure is the first title in the brand new Let’s Build! construction series for younger Minecrafters aged 6 and up.

Have you ever wanted to build an entire theme park in Minecraft to enjoy with your friends? Well, now you can! Let construction expert Sparks from the official Minecraft magazine show you how to make everything from a classic carousel and a water flume to a haunted mansion ride and even an alternate dimensions rollercoaster. With her expert tips, creating a theme park will be easy!

Format: Paperback
Ageband: from 6
Release Date: 02/05/2019
Pages: 64
ISBN: 978-1-4052-9307-5
Mojang is a games studio based in Stockholm, Sweden. Mojang was founded in 2009 by Markus “Notch… Persson and Jakob Porser. Markus Persson is also the creator of Mojang’s best-selling game to date: Minecraft. The alpha version of Minecraft was launched in 2009, and the official game went on sale in 2011. Since then over 100 million copies have been sold, across multiple platforms. It is now the second best-selling video game of all time. In 2014, Mojang was bought by Microsoft. The acquisition hasn’t changed much about the company – they still release and support games on multiple platforms, including iOS, Playstation and many more, as well as Windows and Xbox. Mojang plan to keep their independent spirit and continue to treat their community with the respect and honesty it deserves.