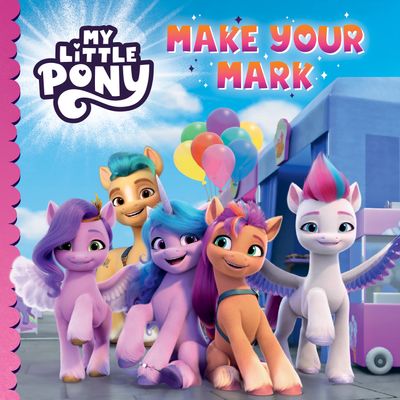 My Little Pony: Make Your Mark

Join Sunny Starscout and her friends for the Maretime Bay Day Celebration in this colourful story book retelling of the My Little Pony: Make Your Mark episode.

Magic has finally returned to Equestria thanks to Sunny and her friends. But there’s still a lot to learn as the ponies face new challenges in an uncertain world. The ponies will need to work together to save magic once again.

This bright and colourful picture book is perfect for My Little Pony fans age 5 and up.

Author: My Little Pony
Format: Paperback
Ageband: from 5
Release Date: 01/09/2022
Pages: 24
ISBN: 978-0-00-853235-2
Hasbro launched My Little Pony in 1983 with a range of toy ponies that became an instant success. Now, 35 years later, My Little Pony is a phenomenon, celebrating the magic of friendship with little girls all over the world.