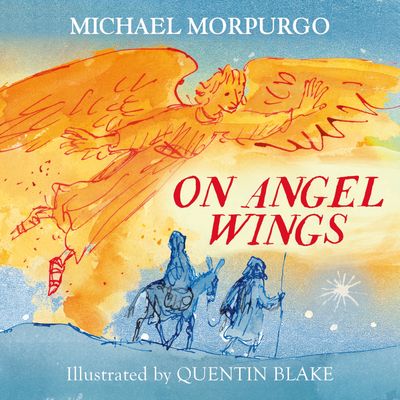 A singing of wings, a glorious light, and a sudden beacon of brightness. It can only mean – can it really? – a visit from the Angel Gabriel himself …

One cold Christmas night, a shepherd recounts the magical story of how he came to be the first visitor to the newborn Christ child – ahead of the other shepherds, and in complete secret.

This magical reworking of the nativity by the bestselling author of War Horse Michael Morpurgo is beautifully illustrated by Quentin Blake. A wonderful Christmas gift to treasure and share.

Author: Michael Morpurgo
Format: Paperback
Ageband: 3 to 6
Release Date: 05/09/2019
Pages: 48
ISBN: 978-1-4052-9315-0
Michael Morpurgo is a master storyteller who has written over one hundred books and won countless awards. In 1976 Michael and his wife Clare started the charity Farms For City Children, which aims to relieve the poverty of experience of young children from inner city and urban areas. In 1999 they were awarded the MBE for their work in creating these farms and in 2006 Michael received an OBE. His novel War Horse has been adapted into a hugely successful and critically acclaimed West End play as well as a film adaptation directed by Steven Spielberg. Michael is a tireless champion for children's books and was formerly the Children's Laureate.Quentin Blake is a world renowned illustrator. He is best known for his collaboration with writers such as Russell Hoban, Joan Aiken, Michael Rosen, John Yeoman and, most famously, Roald Dahl. He has also illustrated classic books, including A Christmas Carol and Candide and created much-loved characters of his own, including Mister Magnolia and Mrs Armitage. His books have won numerous prizes and awards, including the Whitbread Award, the Kate Greenaway Medal, the Emil/Kurt Maschler Award, the international Bologna Ragazzi Prize and the Hans Christian Anderson Award for Illustration. In 1999 he was appointed the first ever Children's Laureate.