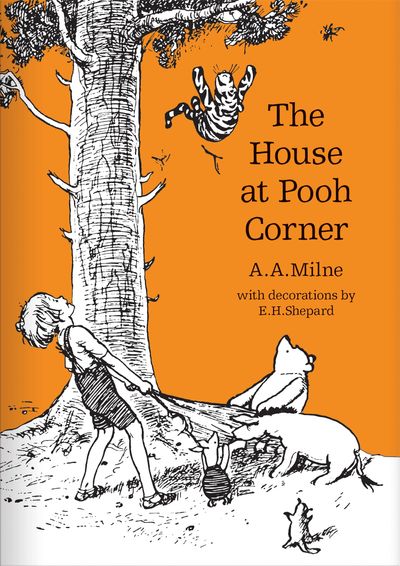 “In that enchanted place on the top of the Forest, a little boy and his Bear will always be playing.”

This is the second classic children’s story collection by A.A.Milne about Winnie-the-Pooh and his friends in the Hundred Acre Wood. In this highly popular volume Pooh meets the irrepressible Tigger for the first time, learns to play Poohsticks and sets a trap for a Heffalump.

In this stunning edition of The House at Pooh Corner, A.A.Milne’s classic characters are once again brought to life by E.H.Shepard’s beautiful decorations.

Author: A. A. Milne
Format: Hardback
Ageband: 5 to 9
Release Date: 25/02/2016
Pages: 192
ISBN: 978-1-4052-8084-6
A.A.Milne was born in London in 1882 and became a highly successful writer of plays, poems and novels. He based Winnie-the-Pooh, Piglet and friends on the real nursery toys of his son Christopher Robin and published the first book of their adventures together in 1926. Since then, Pooh has become a world-famous bear, and Milne’s stories have been translated into seventy-two languages.E.H.Shepard was born in London in 1879. He was an artist, illustrator and cartoonist and went on to draw the original decorations to accompany Milne’s classic stories, earning him the name ‘the man who drew Pooh’.