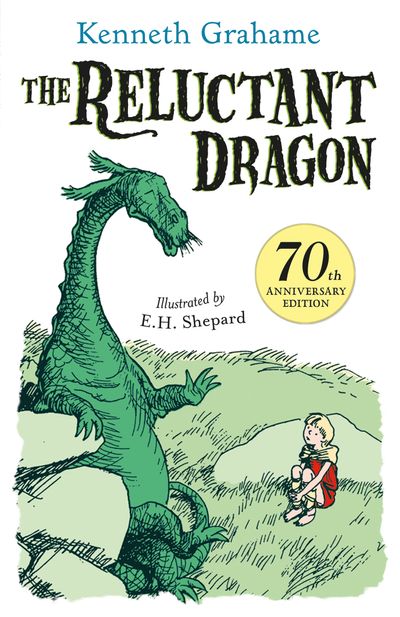 A classic and magical retelling of St George and the Dragon from the author of The Wind in the Willows, Kenneth Grahame with the original and official artwork by E.H. Shepard, illustrator of Winnie the Pooh. The perfect gift for young children.

‘Now, dragon,’ said the Boy imploringly. ‘You’ve got to fight him some time of other you know, ’cos he’s St George and you’re the dragon. Better get it over, and then we can go on with the sonnets.’

Everyone knows St George has to do battle with the dragon, but what happens when the dragon simply won’t fight St George?

The Reluctant Dragon is a funny story of bravery, friendship and derring-do. This children’s classic is made even more collectable thanks to the beautiful illustrations by E.H. Shepard, the artist behind the original illustrations for The Wind in the Willows and the man who drew Winnie-the-Pooh.

The perfect gift for young readers of 7+

Author: Kenneth Grahame
Format: Paperback
Ageband: 10 to 12
Release Date: 03/02/2008
Pages: 96
ISBN: 978-1-4052-3729-1
Kenneth Grahame was born in 1859. He grew up in Cookham Dene, Berkshire, in an idyllic country cottage. He went to school at St Edward’s, Oxford. In 1899, he married Elspeth Thomson and their son Alastair was born in 1900. It was on the evening of his fourth birthday that Kenneth Grahame first told his son a story about moles and water rats. This story, The Wind in the Willows,was publishd in 1908. In 1931 Ernest H Shephard was asked to illustrate it, following his success with the illustrations in Winnie-the-Pooh and his original illustrations for The Reluctant Dragon. Kenneth Grahame died in 1932.