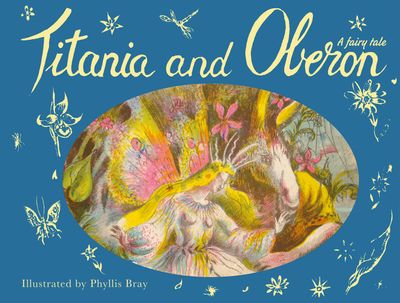 This is a a gorgeous reissue of this classic tale, A Midsummer Night’s Dream by William Shakespeare, originally published in 1945.

“Her bed was a bank of wild thyme where oxlips and violets grew; a canopy of roses and honeysuckle hung over her head.”

Titania, the Fairy Queen, and Oberon, King of the Fairies, fall into a quarrel about who should have charge of a little changeling boy. Oberon and his servant, Puck, cast a spell which causes Titania to fall magically in love with Nick Bottom, a weaver who has been given the head of a donkey. Oberon sees the error of his ways and seeks a way to reverse the spell and restore harmony.

This book is lavishly illustrated by paintings from Phyllis Bray, member of the London Group, making it an ideal first introduction to Shakespeare’s work for children.

Format: Hardcover
Ageband: 8 to 12
Release Date: 01/10/2017
Pages: 36
ISBN: 978-1-84365-329-5
A member of the London Group, Bray is celebrated for her murals at the People’s Palace in Mile End. She was a significant talent and an integral part of the lost history of one of the major artistic movements to come out of the East End in the last century.