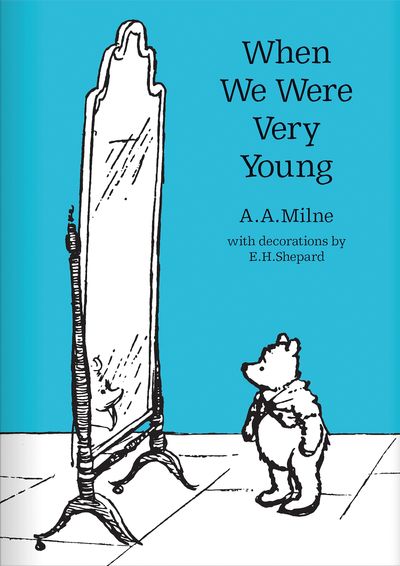 Curl up with A.A.Milne’s classic book of poetry for children, When We Were Very Young. This is the first volume of rhymes written especially for children by Milne – as popular now as when they were first written.

This collection is a heart-warming and funny introduction to children’s poetry, offering the same sense of humour, imagination and whimsy that we’ve come to expect from Milne’s favourite books about Winnie-the-Pooh, that Bear of Very Little Brain.

This book is all the more special due to E.H.Shepard’s decorations, which are shown in full, glorious colour. They are truly iconic and contributed to him being known as ‘the man who drew Pooh’.

Author: A. A. Milne
Format: ebook
Ageband: 5 to 9
Release Date: 29/09/2022
Pages: None
ISBN: 978-0-00-860058-7
A.A.Milne was born in London in 1882 and became a highly successful writer of plays, poems and novels. He based Winnie-the-Pooh, Piglet and friends on the real nursery toys of his son Christopher Robin and published the first book of their adventures together in 1926. Since then, Pooh has become a world-famous bear, and Milne’s stories have been translated into seventy-two languages.E.H.Shepard was born in London in 1879. He was an artist, illustrator and cartoonist and went on to draw the original decorations to accompany Milne’s classic stories, earning him the name ‘the man who drew Pooh’.

‘… the perfect antidote for trying times.’, The Independent -