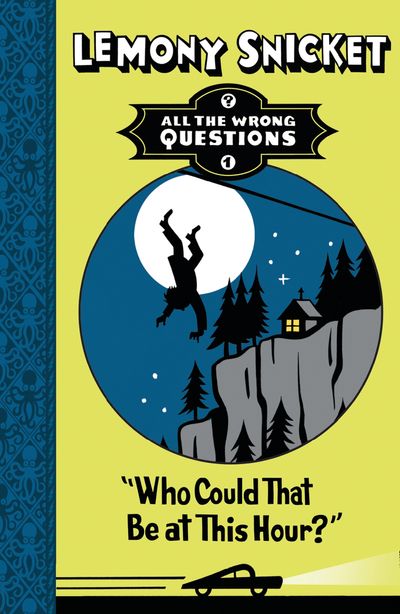 Before he wrote ‘A Series of Unfortunate Events’, Lemony Snicket asked all the wrong questions. Four to be exact. This is the account of the first question.

In a fading town, far from anyone he knew or trusted, a young Lemony Snicket began his apprenticeship in an organization nobody knows about. He began asking questions that shouldn’t have been on his mind. Are you curious about what is happening in a seaside town that is no longer by the sea? Do you want to know more about a stolen item that wasn’t stolen at all?

.In the tradition of great storytellers, from Dickens to Dahl, comes an exquisitely dark comedy that is both literary and irreverent. You’ll laugh only if you find humour in gothic and mysterious things involving detectives and crime solving.

Lemony’s other literary outings in, ‘A Series of Unfortunate Events’ have sold 60 million copies worldwide and been made into a Hollywood film starring Jim Carrey. And in the future things are poised to get much worse, thanks to the forthcoming Netflix series starring Neil Patrick Harris. You have been warned.

‘When Did You Last See Her?’

Author: Lemony Snicket
Format: ebook
Ageband: 8 to 12
Release Date: 23/10/2012
Pages: None
ISBN: 978-1-78031-365-8
Lemony Snicket was born before you were and is likely to die before you as well. He published his first book in 1999 and has not had a good night's sleep since. Mr Snicket is the author of quite a few books, all dreadful, and has been falsely accused of many crimes, all falsely. Once the recipient of several distinguished rewards, he is now an escapee of several indistinguishable prisons. He is widely regarded as one of the most difficult children's authors to capture and imprison. There are thirteen books in the A Series of Unfortunate Events, which should be avoided at all costs. He has also written the mystery series 'All the Wrong Questions'.To his horror and dismay, he has no wife or children, only enemies, associates, and the occasional loyal manservant. Until recently, he was presumed to be 'presumed dead'. Instead, this 'presumed' presumption wasn't disproved not to be incorrect. Most things written about him are not true, but this is.