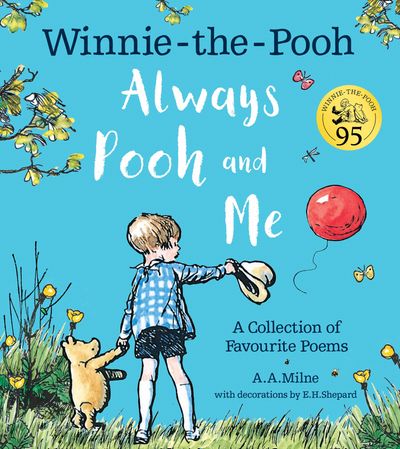 Winnie-the-Pooh: Always Pooh and Me: A Collection of Favourite Poems

A picture book edition of Us Two and other favourite A.A.Milne poems.

This selection of poetry from A.A.Milne’s When We Were Very Young and Now We Are Six, features Christopher Robin and his dear friend, Pooh, with beautiful decorations from Winnie-the-Pooh artist E.H.Shepard, making it the perfect book for those who would like to be six for ever and ever.

Author: A. A. Milne
Format: Paperback
Ageband: from 3
Release Date: 04/02/2021
Pages: 48
ISBN: 978-0-7555-0123-6
A.A.Milne was born in London in 1882 and later became ahighly successful writer of plays, poems and novels. He basedWinnie-the-Pooh, Piglet and friends on the real nursery toys ofhis son Christopher Robin and published the first of theiradventures together in 1926. Since then, Pooh has become aworld-famous bear, and Milne’s stories have been translatedinto seventy-two languages.E.H.Shepard was born in London in 1879. He was a cartoonistand artist, and went on to draw the original decorations toaccompany Milne’s classic stories, earning him the name ‘theman who drew Pooh’.

Winnie-the-Pooh: Always Pooh and Me: A Collection of Favourite Poems

A picture book edition of Us Two and other favourite A.A.Milne poems.